I was pleased to write a guest post for Lost in Fiction UK’s, Lost in Romance for the month of February.

For my twenty-first birthday, my boyfriend and I were gifted a trip to Italy. My grandmother, who had until then only given me underwear and socks, surprised me with tickets to Italy. Our flight from California was long, and felt like we had lapped the sun twice (or maybe more). We were so used to flying, by the time we landed in Milan, our stomachs kept moving. Eager to get off the most expensive amusement ride I’d ever been on, I was ready to go to our hotel and unwind. However, getting there was half the battle. Imagine driving on a racetrack, but instead you’re surrounded with miniature cars zooming past you like they have nitrous tanks strapped to their undercarriage. The assumption was, if there were three lanes, then there must be room for four, and if you didn’t drive fast enough, well, we discovered that lewd hand gestures are the same no matter where you are in the world.

After we checked into our hotel, we went to a café around the corner to eat. Walking seemed safer than driving. We sat down and I ordered some kind of pasta. It looked simple; basil, tomatoes and noodles.

Let me tell you, what we call food in America is only shaped like it, giving the illusion of food. You have never really tasted it, until you have been to Italy. Every ingredient is respected so much, you aren’t allowed to touch the produce at the store—you must wear gloves. They understand that the beginning of life starts with a wholesome seed, not a GMO seed hopped up on pesticides. It is allowed to grow, mature and ripen. I have yet to eat anything that compares to my first bite in Milan.

It was only late October, but the Alps provided a cold nip to the air, which plummeted into frigid temperatures. We were completely unprepared. The nice clothing boutiques were priced beyond our shoestring budget, and with some luck, we found the only thrift shop in Italy. I walked out looking twenty pounds heavier, with three shirts poking out from under my new, used sweater. I was in stark contrast next to the Italian woman parading down the cobbled streets in their leather boots, tight pants, fur coats and strollers.

We stayed in medieval castles, which were beautiful; they reminded me of the period romances I read and loved. They rose like ancient stone pillars on the landscape, with rows of orderly grapevines raking the rolling hills around them. Shakespeare neglected to mention how cold it was living in a stone box. We were told the “national heat” hadn’t been switched on yet. I didn’t know what they were talking about, but I sure hoped it wasn’t a practical joke.

Try as it might, the rustic Italian sweater couldn’t protect me from getting sick, and with only one week left in our trip, I noticed a change in attitude in my loving companion. I assumed he was frustrated with getting dragged down by a runny-nosed killjoy. We couldn’t let my sickness stop us from exploring, so we bypassed Venice and took a water taxi to Murano and Burano, two floating cities known for their crystal and lace. Walking past each home and business was like passing through a rainbow. Bright and colorful, despite the gray gloom that blew down from the Alps, freezing a half smile and grimace on my face. We wandered through a park and my love encouraged me to scale a fence with him into a small vineyard. I may be a romantic, but I’m not a “scale the fence” type of girl.

Days later, he heard of a lovely old mansion just outside of Montegrotto Terme, rumored to have beautifully manicured grounds, so we drove out to visit, successfully avoiding any lewd hand gestures from irritated farmers in Fiats. He wrapped me up in a blanket to keep me warm—I looked like a fuzzy ghost with a cold. It took us nearly an hour to find our way through a large hedge maze, taking every wrong turn. Discovering we weren’t the only ones to get trapped in the maze, we slipped through some worn openings in the shrubs to find our way to a set of stairs. Rising above the hedgerow, a stone platform wrapped with a gazebo allowed us to overlook the puzzling pathways we had just escaped.

There, he sat me down with a serious gleam in his eye, and I knew. I knew what was about to happen. Honestly, I don’t really remember what he said to me. It was not the words that were important, but the moment, and the moments leading up to it. I knew then why he had been so anxious as the trip neared an end.

The Country of Love couldn’t let us leave without giving us a story. Our own love story. The birthplace of Romeo and Juliet is a land whose beauty is world-renowned. And it is well deserved. As my memory fills with the gravel of time, the memories from Italy are still there; faded, maybe, but precious jewels for me to treasure and share. Happy moments stick out, like when we ate real gelato for the first time, and when he encouraged me to use my choppy Italian with an old woman sitting at her post, in her window with a guarded frown. I called her planter box of herbs “bellissimo”. She gave me the widest toothless grin I have ever seen. Snapshots fill my thoughts, and they all have him in them.

During the month of love, I send you my warmest wishes,

Info about the author:

Natasha Brown lives with her husband, two children and three dogs in Littleton, Colorado. She was inspired to write a story about a girl struggling with her heart condition, after her daughter was born with heart defects. “I like lead women who have the tenacity to carry on even in the face of adversity. Ana is a character I look up to- and I can’t wait to share with my readers where her character is going in the series.” To know more, visit her Blog and Twitter

Natasha Brown recently released her first book, “Fledgling” (Book One of “The Shapeshifter Chronicles”), a YA fantasy romance.

To buy it, simply click on the cover below:

In my younger years I was extremely shy. I hid from cameras- of course it didn’t help my father was a photographer. I also had an afro that wouldn’t quit. My grandmother loved combing it out, it may have felt good, but the results were dangerous, Rosana Dana, eat your heart out (SNL old-school shout out). In other words, it was hard for me to hide. Not when I was enveloped with people whose hair didn’t poof out like an aura around them.

I grew up in a family of artists, so I was surrounded with creative people following their dreams. My father graduated from UC Berkley as an architect, and it wasn’t soon after that he decided it didn’t make him happy.  So he became a fine art photographer. We traveled to art shows and festivals through my childhood, and I was privileged to be saturated with passionate people who were doing what they loved. In my teenage years I was ready to express myself. I may have been a wallflower, but that didn’t stop me from dying my hair fire engine red, then magenta, then green and getting my nose pierced. You could say I was a cross between a peacock and a chameleon.

Something that develops in the teen years is self-doubt and a lack of confidence. Most effecting, is the fear of not fitting in or being accepted for who you are. So, the two obvious paths are to either become a peacock and dare people around you to oppose your colorful display, or to blend in as best you can and not stick out. I am sad to say self-confidence issues don’t end in your adolescence, they just morph and change from displaying pink hair and letterman jackets to breast implants and sports cars (I have neither).

I helped my son’s forth grade classroom make pink batik shirts for an anti-bullying campaign a couple months ago. Let’s face it, bullying has always been a problem. More and more distressing stories are featured on the news about people being burned, beat and singled out for being different, or for making poor choices. Kids are committing suicide because they texted an embarrassing picture, or because they are harassed for being different. I know what it is like being depressed and not knowing the value of my own life. I am thankful I stuck it out and got through it all.

That curly hair I mentioned earlier, was at one time a fun topic for two girls who would tease me in the hallways. It made me feel like a reflection of a girl. Empty and sad. It is HARD being a teen today. Even harder with phones in every pocket ready to spread a rumor on a whim. The thing is, everyone is feeling the same way (sure in varying degrees) but everyone wants to be accepted for who they are. The easiest thing is to deflect your own angst and direct it at that weird guy, who wears the same pair of shoes every day, eats by himself and wears hand-me-downs. 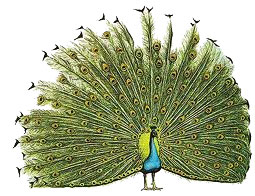 You know the cool thing? Everyone is a peacock deep down- with colorful, creative and unique facets. Hiding in the shadows may be safe, but no one can appreciate you for who you are if you’re hiding. And if they can’t see the beauty in who you are, then someone else will. Not everyone has to like you. The only person that should appreciate the idiosyncratic details of who you are…is you. Things change, that’s a guarantee. If you aren’t happy with where you are now, then hold on. Just wait.

It was easy to write about the same plaguing issues with my characters, Chance and Ana in Fledgling. They both know they’re different, and don’t fit in; yearning to be accepted for who they really are. Where do they go from there? I don’t write and tell.

It has been a hard process for me, coming out from hiding to self-publish my own book. It takes a lot of guts to put it out there. But the reward is so sweet. When I get reviews from people who are reading my novel and enjoying it, it makes my day. I guess in the end my best advice is, be who you want to be, and dream what you want to dream. Because, anything is possible.