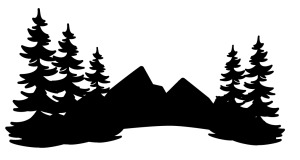 Silvery light found its way to the foothills from the crescent moon. The sun had slipped below the horizon hours ago, taking with it all traces of warmth. A chill settled on the evergreens, but it didn’t bother Jax. He squinted at his phone. It was just past eleven. He’d have enough time to run free before turning in for a solid six hours’ sleep.

The energy that had been building inside him over the last few weeks made his pores tingle as he glanced through the trees at his trailer and, beyond that, KT’s house. When he’d left the elderly woman in her detached garage earlier, she’d been clearing tools off her workbench with her eyes glued to the wall-mounted television, berating the hosts of the gearhead show she liked so much. Jax had only known his new boss and landlord for a few weeks, but he knew she would head to bed soon.

He’d waited long enough. This night was his.

Jax peeled off his clothes. Goosebumps rose on his skin, and a plume of steam broke from his lips. The effort it took to prevent the energy buildup from altering his form was taxing. Jax stared up at the crescent moon while he took down his defenses and allowed the power that crackled and sparked in his belly to surge throughout his body.

His head rocked back, and then he crouched forward onto the ground. A golden carpet of fur sprouted from his tattooed muscles as the change took over. Paws replaced his hands and feet, and bristly long whiskers grew from his muzzle. With each breath, a rumbling purr rattled from his mouth. The rush of energy subsided. When he sensed the transformation had concluded, he stretched his forelegs and spine.

Dark shadows hid nothing from his feline perception, and the chilly air couldn’t breach his warm fur coat. This was his opportunity to run free before he returned to the lie that he was an average blue-collar worker.

Jax trotted down the hillside between the trees, staying clear of the occasional gravel road or mountain home. Most of the property up here was owned by the wealthy or the old-timers. Their evergreen views disguised the fact that just beyond a few ridges were the bright lights of Denver. Not a bad place to set up for a time, he’d figured as he’d rolled into town from Wyoming a few weeks ago.

His powerful, lithe body moved north along the range, his ears cupping the air, filtering the sounds around him. In the distance, he thought he recognized the strangely musical thrum from the highway.

It felt good to shed his clothing and run free. His instincts drove him to stay on the move, which was why he’d seen so many sights in his thirty-one years. He’d traveled from coast to coast and back again, finding new towns to settle in for a while. Until things got a little too comfortable.

Jax kept to the wooded area of the hills, where he wouldn’t be seen by anything but the wandering housecat he frightened away and the owls and bats that toured the skies. Time was lost to him when he escaped into the wilderness as his alter ego, the cougar

Out of breath and sufficiently contented with his trek through the Rocky Mountain foothills, Jax turned toward home. He wove through the trees and bushes until he spotted his pile of clothing on the ground. A gravelly open space beyond a cluster of pines led to KT’s house and detached garage. The security light aimed at the back of her property was on. Jax’s truck and trailer were bathed in its yellow light, casting long shadows down the hill toward his current hiding place.

He normally wouldn’t have hesitated to transform again and get dressed, but his instincts made him pause. He sniffed the air and pointed his ears toward KT’s garage. A strange gurgling sound caught in his ears. Curiosity took hold, and he looped around her property, keeping to the shadows. He slunk up to the outer corner of her garage and edged his muzzle around to take a look.

The double-wide garage door was still open. Though Jax hadn’t known KT long, he knew she closed it up tight every night before she headed for bed. The lights were off inside. The front end of her ’64 Chevy GTO sat within the dark, facing out to the gravel driveway. It blocked his view of her workbench.

The gurgling noise was close now. Jax crept around the front of the rusty GTO’s grill until he could see into the dim confines of the garage. Lying on the ground in a puddle of blood was KT. A man kneeled over her with his mouth pressed to her neck. Dark shoulder-length hair hung in a curtain around his face, shrouding his features.

Jax stared in silence for only a moment before he sprang to action. He rushed forward a few steps and put his weight onto his haunches, prepared to spring. A deep growl erupted from his chest and poured from between his powerful jaws—a clear and direct warning any animal would respect. He hoped.

The man’s face lifted from KT’s neck, his mouth covered in her blood. His eyes flashed in surprise as he appeared to realize the danger he was in. He slowly rose to his feet, glancing longingly at the limp body on the floor, then focusing on the cougar inching toward him. The man lifted his lips to reveal bloodied teeth. He edged out of the garage and ran into the night.

Jax craned his neck, watching the man’s silhouette disappear before turning toward his landlady’s still body. He walked close enough to lower his pink nose to sniff her wounded neck. The metallic aroma of blood filled his nostrils. He stared at her chest, detecting the gentle rise and fall of her ribcage as she breathed.

Thank God, he thought in relief.

Her eyes stared unseeing at the ceiling. He wondered if she perceived anything that was happening. Despite being seventy years old, KT was the toughest woman he’d ever met, so there was reason to worry if she wasn’t swearing or throwing a wrench between his eyes. She lay still, as if in a coma.

Moisture saturated his forepaws, and he realized he was standing in her puddled blood. Jax backed away quickly, leaving a trail of bloody footprints. He needed to get to his phone to call an ambulance. She was alive at the moment, but he didn’t know how extensive her injuries were. He ran out of the garage and into the silent night.