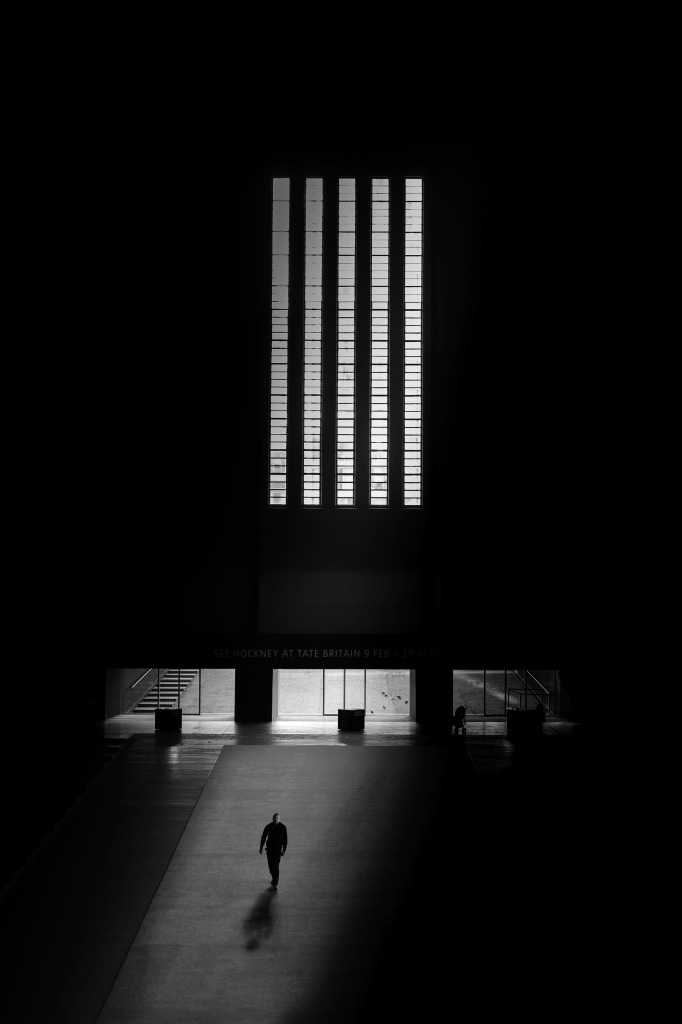 The End of a New Beginning by Natasha Brown

The air was thick. Raif could taste it on his gills.

He could remember a day in his youth when the constant smog and cloud cover had parted, revealing a blinding round orb in the sky. The sun. Its light had touched his skin, warming him from the outside in. The muffled squeals from the other children had been muted by their filtration masks, but their pale fingers reached up into the air like he’d imagined saplings might. He’d only seen photographs of trees the way they were before the permanent dark fog had settled over the world. Now, the only plants were grown underground for their sustenance and oxygen. A rare and valuable commodity.

The streets were empty as he turned a corner with his eyes on the concrete. Raif was careful to keep his footsteps from echoing down the humid street. He scanned the windows that had all been painted over, sealing the seams shut as well as covering the glass with a thick sheen of white latex. They’d been told it had been done to help seal out the bad air, but Raif wondered if it was to block out all memories of the past. So they wouldn’t remember what they’d lost.

He hurried by the library. It no longer held books like it had before the world changed. It no longer served the purpose it used to, or so he’d been told by his mother. It was used by the electorate now. The people who governed the civilians of New Brunswick. This was the only building in the city without paint covering its glass windows. He’d seen round faces staring out in the past, but he didn’t search for them today. He turned down an alley, careful to keep out of sight. He’d been warned not to go exploring outside and didn’t want to get caught, fearful of the repercussions. Though he wasn’t fearful enough to remain down in block seventeen with the rest of the moles like him. The below-grounders.

Murky smog trailed after him as he moved in silence. It flavored his gills while he breathed it in. It wasn’t something he’d call appealing, but it was preferable to the stuffy, dankness of being secured below with everyone else. Trapped.

He moved through the shell of the old city like a specter. He was too young to know what the world had been like before the air had chased everyone inside, but he’d seen pictures. Happy faces of families spending time in parks, sporting events or traveling the world. There was none of that now.

Raif made his way to the edge of town, looking over his shoulder, searching for movement. Finding none, he hurried through the mist and down the slope to the trail he’d found one day months ago by accident. His fingertips brushed over the brown stalks of the dead plants as he went. They rustled at his touch as if trying to speak to him, to whisper their last words.

The terrain became rocky, and he knew he was getting close. The brown-tinged fog was so thick, he couldn’t see more than ten feet ahead of him. But here, the vapor tasted different. It was what had drawn his attention when he’d first found this place. Raif climbed down into the rocky cave opening.

The normal orange lens that filtered the haze wasn’t present here. Instead, a bluish tint glowed from the darkness. He took a deep breath, inhaling the oxygen around him. When his breath rasped out, the sound echoed through the watery cavern. Raif walked around the edge of the rocky shore and sat on a chunk of cement, a remnant of the old world. He reached out to touch one of the glowing spores that grew like a toadstool, something he’d seen before in a book his mother used to read to him. However, there was no smoking caterpillar sitting on this one, and the mushroom wasn’t nearly as large as a girl.

A rock clattered near the entrance of his secret cavern, and he looked up to find a human silhouette. He straightened and froze. Had he been followed? Would he be punished for disobeying the electorate? His blood pressure rose as he prepared himself for the worst.

A muffled female voice came from the stranger’s ventilator mask. “Who are you?”

Raif lifted his face to look more closely at her. He thought everyone knew him. If you’d asked anyone from his underground block, they’d be able to tell you who he was. They had their own name for him, Gilly the freak born with gills.

She took a few careful steps deeper into the cavern and stopped, cocking her head at him. Long dark hair fell over her shoulders, and she was wearing tight jeans. The bulky sweatshirt that covered her upper body wasn’t official enough for a member of the electorate.

He cleared his throat. “Raif Stuben from block seventeen.”

“Where’s your ventilator?” She moved even closer. Now, only a few strides away from him.

He lowered his head, wishing he had long enough hair to hide under. Like most other moles, his hair had been shaved to avoid the passing of lice, a common problem in the underground blocks. Raif rubbed his velvety stubble and mumbled, “I don’t need it.”

Her hand lifted, hovering inches from the slits under his jaw. Without saying a word, he nodded, knowing her unspoken question. Did his defect have something to do with it?

There was no doubt she was an above-grounder. She smelled pretty. Like flowers. He didn’t know what kind. He’d only ever smelled the sterile, unscented soap the moles used. But whenever the administrative members of New Brunswick came visiting, the women especially, their aroma brightened the depths of block seventeen.

“I don’t see the fog here.” She gestured to the clear air in the cavern. “Is it safe to breathe?”

Raif kneeled and nearly touched one of the glowing spores. “It’s these plants. They filter the poison from the air.”

He felt her eyes on him, so he looked up at her. She put her hand to her mask and slowly lifted it off, exposing her mouth. She took a tentative breath before removing her ventilator entirely. He could now see she was no older than twenty, near his age. Her brown eyes crinkled in excitement as her lips parted into a smile. “We should tell them. This could change everything.”

Raif returned his gaze to the glowing mushroom and frowned. “They know.”

“What?” she said, clearly confused.

“It’s why I’m forbidden from coming out exploring. If you’re not interested in answers and only want to maintain the status quo—”

“You’re lying,” she interrupted. Her eyes narrowed, and she backed away from him. “They want to find a solution, my father’s told me so.”

He stood up and sighed. He wasn’t interested in a fight. If she didn’t want to believe him, she wouldn’t. It wouldn’t matter to her that he’d already told block seventeen’s administrator, or that he’d been laughed at.

The young woman’s annoyed expression drooped into sadness. Her jaw clenched, and her eyes pinched shut. “I thought they cared.”