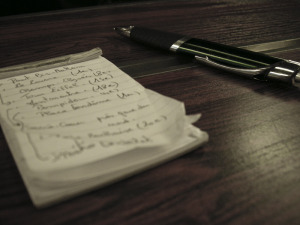 Okay, you’re sitting in front of your computer, fingers poised at the keyboard. Ready.

Hmmmm, maybe you could write about your trip to the grocery store. Or maybe driving your kids to school? I do these things all the time. Do I find it fun and entertaining walking down the isles at the store, or hollering at my children to stop fighting? No. But, you don’t have any ideas to write about other than what your life is filled with. What if you think your life is boring?

What if. That’s a good way to start. Pose the question, ‘What if…’

Have some fun with this-

There is another tip you have probably heard before. Write what you know. If you are a nurse,  you can probably write a very convincing story about a doctor traveling to Malaysia to help children with deformities. If you are a mother,  you could probably create an effective story about World War II or living in a psych ward.

If you enjoy writing you may not struggle with getting ideas out. But even the best writers have their moments (at least that’s what I tell myself).

“I write one page of masterpiece to ninety-one pages of shit,” Hemingway confided to F. Scott Fitzgerald in 1934. “I try to put the shit in the wastebasket.”

When I came up with my idea for Fledgling, I drew from my own life. I wanted to create a heroine that my daughter could look up to. But I wanted it to be someone like her, a girl born with heart defects. The character took on a life of her own, and now the world I created is bubbling up, eager to make its way to paper.

Writing above all, is what’s important. You can’t improve or find the diamond in the rough if you don’t write. Everyone has a masterpiece within them- the challenge is getting it out.

So many writers have found writing success with magical, mystical and paranormal bad-boys, and heroines in select cases. A huge surge of vampire novels have made it to screen and television, and I admittedly have been sucked into the flurry of excitement. There is obviously Twilight, which found a huge audience and probably an even larger closet-audience. The Sookie Stackhouse series, aka Trueblood, went more dark and dirty, and Vampire Diaries can’t be left out either, with it’s small town setting. Producers wouldn’t spend their time or money on something that didn’t draw an audience, so clearly there are mass numbers drawn to blood drinkers. Is it dangerous and sexy? Sure. It clearly appeals to the public. At least a portion.

How about werewolves and shapeshifters? Twilight mixed the appeal to two different legendary creatures in a love triangle- the battle still rages amongst readers. Shiver created a character trapped, unable to stop himself from changing into a wolf. Trueblood seemed to bring all imaginable creatures into the mix- vampires, shapeshifters, were, fairy and more. Is it the appeal of the animalistic, dangerous and frightening, or is it simply the draw of the forbidden? Something that you can’t have. Like that 2000 calorie chocolate mud cake, that tastes like love itself- one plateful equaling a days worth of caloric consumption. I know if I eat that tasty mouthful of joy, the tire around my waist will thank me. Why do I eat it anyways? Because I can’t resist.

Guilty pleasures. I know the paranormal isn’t for everyone.  I’m drawn to it because it is an escape from the norm. I think it allows us to imagine that our life is rimmed with exciting, magical stories, which excite us and make us feel alive. It provides an electric current, carrying our fantasies away, making you think anything is possible. And anything is possible through prose.

I wrote about what thrilled me, a frail young woman, Ana, who is drawn to a mysterious shapeshifter. She is afraid of life letting her down, but finds inner strength and love despite herself. A whole new magical world opens itself to her, along with new dangers. If you ever wondered about mythical creatures and the root of their stories, be prepared for some answers after reading The Shapeshifter Chronicles.

But what about you? Is it the circumstance or the character that forces you to read on? Unrequited love or forbidden fruit, dangerous, with a thirst for blood? Who would you want to find staring up at your window?

Ready to go out and read a two new characters, that will pull on your heart strings and excite you? Chance and Ana want to meet you- 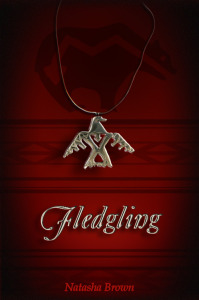 I am pleased to announce that Fledgling, Book 1 of The Shapeshifter Chronicles, is available on Amazon. I hope the reading audience enjoys the premise as much as I do!

“Set apart from other eighteen year olds, Ana Hughes knows she is different. A life threatening heart condition smothers her future and she yearns to feel normal. Her hopes are pinned on a fresh start in a remote town far from her native Colorado. Among the locker filled hallways in Clark Bend High, Ana keeps to the shadows, not wanting to draw attention to her violet tinged lips and wilted silhouette. And she almost succeeds, until she meets Chance Morgan.

Struggling to keep up appearances, she soon suspects Chance is hiding something as well. His animal-like senses, miraculous healing ability and peculiar reaction to her Thunderbird necklace compels Ana to question if there’s more to the stories about his Navajo ancestry. Without any other explanation, she fears he is playing tricks on her. But the truth may prove too much for Ana’s delicate heart…”

My inspiration for the story is my daughter, who, like Ana was born with multiple heart defects. Her future, however is not as bleak and she should look forward to a healthy, happy life.

The character’s I wrote in the story are close to my heart, and I look at them like my children. I am amidst the second book of The Shapeshifter Chronicles, and I look forward to releasing it to Amazon and my loyal readers.